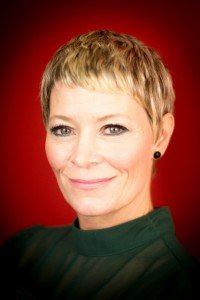 Sharon Percy started her acting career at the tender age of eight. After performing in a school play she heard there was a youth theatre opening at the New Tyne Theatre and was encouraged to join. Sharon stayed a member of the New Tyne Theatre Stage School until she was eighteen, and during that time she performed in many musical classics, including Annie (playing the title role twice!), Seven brides for seven brothers, Little shop of horrors, and numerous others, using this important time to develop her theatre skills. When Sharon left school she studied on the B-Tec Performing Arts course at Newcastle College which gave her the opportunity to use her skills and develop new ones.

After leaving Newcastle College, Sharon was spotted by Live Theatre company’s Artistic Director, Max Roberts, and was cast in the play Your Home In The West, giving Sharon her first major professional role alongside Geordie favourites, including Robson Green, Charlie Hardwick, Joe Caffrey and many others. Since then Sharon has been working steadily in theatre, television, and radio productions, including a production of Cooking with Elvis in London’s West End with comedian Frank Skinner, Granada’s Cracker with Robbie Coltrane and Ricky Tomlinson, and is featured in the feature film School for Seduction starring Kelly Brook and Tim Healy. Most recently Sharon has featured in CBBC’s bafta nominated show Woolfblood, and is also featuring in Ken Loach’s latest film I Daniel Blake.

Sharon has also taken part in many new writing development workshops, as well as book launches celebrating the works of already accomplished writers. Sharon has also worked for one of the country’s largest murder mystery companies, facilitating the evening and playing one of the two lead characters. Sharon also has experience of Drama facilitating for Live Theatre’s Youth Theatre and Education Department helping to develop the new generation of North East talent.